Week Forty-Four: THE HIVE: when books get rejected

As part of an eleven-book contract with my publisher, I have written a new dark thriller.

It's called THE HIVE.

THE HIVE on Amazon US

THE HIVE on Amazon AU

THE HIVE on Amazon CA

If visiting that link though, you will see this book is self-published, not traditionally published.

On sending my finished thriller to my publishers a few months back, I noted it was rather darker than previous psychological thrillers I had written as Jane Holland, leaning toward horror in places, and suggested we might want to use another pen-name instead.

They didn't reply for two weeks. Then they wrote back, declining THE HIVE and terminating my contract with them, except for the final romance in a series due later this year.

I was devastated. I talked the situation over with my very supportive agent. I explained how much I'd been depending on that contract to keep me afloat financially. Everyone knows it can take anything up to a year from acceptance for a new publishing contract to be signed and the initial advance paid. Assuming there even is an advance in these digital-first days.

Only I don't have a year to pay my bills. They need to be paid every month, or things start to fall apart. A full-time writer's life is precarious like that. Which is why I first turned to self-publishing back in 2011 and still regularly publish short fiction online under an array of names. But I rely on my traditional contracts to add cash advances to that income.

So we both agreed that self-publishing this rejected book was the best way for me to keep solvent, while I work on a completely new book to be submitted to other publishers later this year. And I thank my agent profusely for being so understanding.

But that plan, of course, depends on THE HIVE actually selling more than a few copies. So I've decided to publish it as a Jane Holland thriller, as that is my best-selling name.

Worried about the future, with three dependent children still in school, I've now started several online shops as well as my self-publishing sidelines. More on that anon. Jobs are hard to come by in rural Cornwall, and in my fifties with no work experience to speak of, online hustles are probably my best bet. So I'm learning new skills in that area, and working hard to get by.

Curiously, this is not the first time a book of mine has been rejected by publishers (though not while under contract!) and then self-published. Last time, it was GIRL NUMBER ONE. I self-published that in 2015 after multiple rejections, and it reached #1 in the UK Kindle store within a few months of publication. It has since sold over 100,000 downloads.

If THE HIVE manages similar success, I'll be ecstatic. But times have changed since 2015. All I'm hoping for is that this book helps me stay afloat as a struggling writer. (Buy it here!)

I'm not well-off. I didn't marry a wealthy person. I rent my house, I drive an old banger, I have no capital or investments or savings. But I am a hard worker. I write several 'big' books a year, and also self-publish multiple novellas and short stories under other names to supplement that. I am constantly working on something new. Yet still I struggle to pay my bills.

The book market is saturated. Only top names seem to do well these days. Writers get the tiniest slice of the publishing pie, often only a few pennies per sale. Publishers do not support writers by growing them and investing in their careers, as was once the norm, but discard them at the first sign of low sales. Nobody is safe, not even established writers.

Readers who want to keep their favourite writers in the game need to help them compete in this dog-eat-dog marketplace, via word-of-mouth and retweets etc. Because what publishers want most is the next shiny new thing ... and while I may be shiny on occasion, I'm not new!

Please, if you like thrillers - or me! - help me get THE HIVE out to new readers. Especially in the US market, which is yet to discover me en masse.

The Hive: a brand-new thriller for 2019 from Kindle #1 bestseller Jane Holland

Scarred by fire from infancy, with a persistent stammer, Charlotte has always been in the shadow of her glamorous theatrical parents. So it's a shock when her mother commits suicide.

Left to care for her sick father in the dark maze of her childhood home, Charlotte begins to unravel. First, there's the mysterious arrival of a box of dead bees. Then buzzing noises in the attic. People are watching her. Listening to her.

Everyone thinks she's losing her mind. But an old photo suggests another, more sinister possibility ... 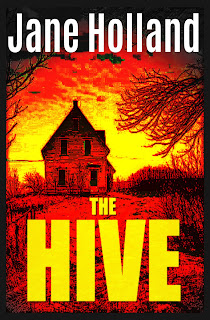 THE HIVE on Amazon US

THE HIVE on Amazon AU