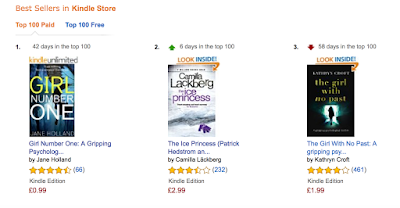 I'm utterly thrilled to announce that my self-published thriller, GIRL NUMBER ONE, hit the coveted number 1 spot in the UK Kindle store two days ago, on December 10th after 40 days in the Top 100.

I wasn't sure if it would stick there more than a few hours at first, but it has so far, apart from a few sideways shifts, but then returning to the top spot. Maybe a few days longer, if I'm lucky?

I was so shocked at first, really stunned, and only found out because the previous occupant of the top spot for many weeks, Kat Croft, author of The Girl With No Past, tweeted me to say I was #1. What a fab person she is.

The kids were even more excited than me and started making out revised Christmas lists, as you can imagine. And I spent the next 24 hours with my nose glued to the screen, sure that it would all end as suddenly as it had happened. But it clung on there, and I have never been so happy to stay in one ranking spot in my whole time as an indie author!

So now I would like to thank everyone who's been involved with helping to promote this book and getting GIRL NUMBER ONE to number one.

No one gets to a top ranking spot with an indie book without legions of friends on social media, tweeting and retweeting, sharing posts, and generally backing up an author and letting people know about their work. As far as I'm concerned, I could not have done it without you. Thank you!


You can read more about this title here, how it was rejected by over a dozen major UK publishers, and subsequently rewritten and self-published. I am completely thrilled to have hit the top spot in the UK ebook chart with my baby, and even if it only lasts a couple of days, I will never forget the wonderful feeling of being able to click on the Kindle Bestsellers' chart and see my OWN BOOK and name up there at the top.

And for those who might like to see their own books up at the top of their charts, I have laid out some tips and pointers describing how I did it, on this blog.

GIRL NUMBER ONE: AMAZON US

Eleanor Blackwood discovers a woman's body in the same spot in local woodlands where her mother was strangled eighteen years ago. But before the police can get there, the body vanishes.
Is Eleanor’s disturbed mind playing tricks on her again, or has her mother’s killer resurfaced? And what does the number on the dead woman’s forehead signify?
Posted by Jane at 13:37

Email ThisBlogThis!Share to TwitterShare to FacebookShare to Pinterest
Labels: bestsellers, Girl Number One, how to sell books, kindle, number one spot, self-publishing, success story, top of the charts