Those who know me well will agree that I am a genre-hopper. I hop from one genre to another with scant regard for market positioning, or what publishers and retailers like to call 'author branding'. This is one explanation why, despite having written several dozen novels, I am not a star in any one genre. (I will leave the other possible explanations for you to guess at on your own.) But that does not mean I would not like to be!

About a year and a half ago, while I was still knee-deep in an historical fiction series, it was suggested to me by a senior editor that I should write a contemporary thriller. A crime novel, but not a police procedural. Being a rabid fan of Lee Child's Jack Reacher novels, I embraced the idea with enthusiasm and excitement. At last, a chance to show what I could achieve as a contemporary writer within a popular mass-market genre.

But of course it's also an over-crowded market, and the novel I produced over the next year did not appeal to the editor who first suggested it. It went through several laborious redrafts, then was sent out to other publishers. Nobody wanted it. The rejections differed as to detail but the overall message was the same. Like the three bears' porridge, it was too hot, too cold, too salty, too sweet etc. for the market.

The project was then handed back to me, with the suggestion that I should self-publish.

To say I was disappointed is grossly to understate the matter. It was a serious blow to my self-confidence as a writer, especially as I was by that stage out of contract with all my publishers. After some years in traditionally published historical fiction, that book represented my calling-card script as a contemporary writer. A calling-card that had been handed back to me by a disdainful majordomo, and the door slammed in my face.

After some time nursing my wounds - I wish I could say 'downing tequila on a desert island' but I'm not that cool - I sorted through all the rejections I had seen and picked out the main thrust of their issues. I worked out how I could rewrite the book to 'fix' it. One key change was making my main protagonist older. A simple enough change, on the face of it. But of course that involved rewriting every single page of the book, because in the process of recasting her character, her narrative voice had to change, to mature, to harden. Rather like me as a writer ...


The main differences I noted between writing GIRL NUMBER ONE (the title of my thriller) and my previous novels, mostly either historical fiction or romances, were as follows:

Pace - a contemporary thriller is fast and furious. It has to be, to deliver the requisite thrills and keep an easily distracted reader turning the page. So introspection and description take a back seat, and action comes to the fore. The verb becomes king here, the adjective and adverb have to be rooted out. Not 'I thought' or 'I saw' (I chose a first person narrator) but 'I did'. Dialogue can take the place of internal monologue, which means it has to work harder, to underline character, drop clues and turn the plot.

Tone - the narration of a contemporary thriller is terse, or at least that's how I prefer it. It's also highly self-aware. This is someone who observes everything around them, whether a trained or natural detective, constantly noticing, examining, deciphering, unravelling, understanding. And often without an excess of emotional response, as emotion tends to hamper that process. (Emotional response being the sine qua non of the romantic novel, I often found myself working at the opposite end of the narrative spectrum to my other books.)

Character - the characters in a contemporary thriller are not, in general, those you might encounter in other genres (though that rather depends on the writer). They have to be boldly drawn, sometimes even starkly and at speed, because a thriller is about action and reaction, rather than a leisurely character study. But the main protagonists also need qualities that others around them noticeably lack: massive intelligence, strength, resolve, courage, generosity, kindness, plus a few special skills. They must leap off the page without being caricatures, and linger in the reader's memory, not least because some of them may become suspects later.

Where the narrator is concerned, assuming that is your chief protagonist, we need the reader to care about that person deeply. Otherwise, there will be little reason to keep reading when he or she is put in danger. Such a character must be sympathetic and strongly-drawn enough to elicit an emotional response from the reader. By which I really mean, he or she must feel true.

Truth - a contemporary thriller should seem realistic, even more so than romantic or historical fiction, and the actions of its characters must be completely believable too, even when your plot is unlikely or even preposterous at times. So how to achieve this? In the same way as a sci-fi or fantasy novel, you have to anchor the world of your novel somewhere that feels very realistic, and therefore works to distract the reader from the unlikeliness of your plot.

In my case, I decided to follow the well-worn advice, write what you know, and achieve narrative truth that way. So I based the world of my debut thriller on the Cornish village in which I was actually living at the time of writing. I was then able to describe, with absolute accuracy and consistency, the village layout and its surrounding area, the views, the flowers in bloom at each season, the likely weather, the very feel of the air ... A bit of a cheat, perhaps, but I wanted to nail that 'truth' element of the thriller first-time-out.

Did I manage to nail it though?

The proof of the thriller is in the reading, and I hope you will give mine a shot. You can find a free sample or buy GIRL NUMBER ONE on Amazon. Digital only at the moment, with paperback POD to follow. 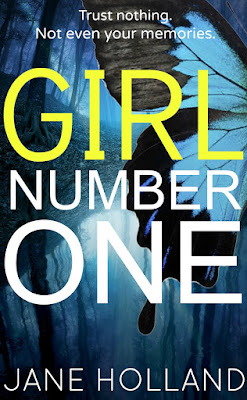 GIRL NUMBER ONE Amazon US