Cathie Hartigan asks: What Kind of Novel Are You Writing?

I'm thrilled to have my friend and fellow author Cathie Hartigan from Creative Writing Matters as my guest on the 52 Ways blog today. Creative Writing tutor, novelist, talented musician, and an administrator of the Exeter Novel prize, Cathie has many strings to her bow. And as you can see, she is going to lead us through the thought processes and research that led her to write her fascinating debut novel SECRET OF THE SONG.

SECRET OF THE SONG was released on October 6th and has garnered much critical praise. I have read the novel myself and can highly recommend it: a rich but delicately woven time-slip, it will transport you to a complex, musical world you may never wish to leave.

So you have a great idea of what your novel will be about, and are keen to get going, but before you start tapping, there is a crucial question you must ask yourself. What sort of novel am I writing? Make your decision carefully and base it on the sort of writing you can do, rather than the writing you wish you could do.

I’ve always written contemporary women’s fiction. My most successful short stories have been told in the first person, via characters with strong, individual voices. I love writing about relationships between families, friends and lovers, I’m curious, keen on puzzles and I find Italy, singing and a sense of humour irresistible.

So what sort of novel would I write?

Two separate incidents provided me with the idea for my novel, Secret of the Song.

The first arose at a choir practice when we were asked to sing a piece of music by the Italian Renaissance composer, Carlo Gesualdo. Who was he? I had no idea. The music was really difficult and I don’t think we even made to the end of the piece. There were murmurs of disapproval about Don Gesualdo though, so I decided to look him up.

It transpired that Carlo Gesualdo was a bad man. In fact, two centuries before Byron, he was much madder and badder and decidedly dangerous. Plus, whereas Byron was a lord, Carlo Gesualdo was a Neapolitan prince. Gesualdo’s story, and that of his lovely wife, Maria and her dashing lover, Duke Fabrizio was equal to anything the Tudor court in England could muster at that time.

But the retelling of an incident already documented isn’t a story; it’s an account.

Then, coincidentally, I heard a programme on the radio, during which musicians and neurological experts discussed the power of ‘ear worms’, those maddening tunes that go round in your head for days. Was Gesualdo mad because of his music, I wondered? More significantly, could his music send the musicians who performed it mad?

Here was a story. I would write a contemporary mystery about a singer haunted by the song she was singing. Yes, that was it.

But during further research, I read the witness statement of a servant, and felt hugely sympathetic towards the poor girl caught up in such a dreadful situation. With only a little imagining, her voice was in my head. Yes, she must be heard.

So I had two heroines: one in contemporary Exeter, and one in Renaissance Naples.  I felt there was only one sort of novel that would do the story justice. Secret of the Song is a time-slip mystery. The decision to write the dual narrative as alternating chapters proved challenging, but it also kept both plot lines moving forward at a good pace.

Remember that every reflection, every look back, brings the plot to a dead stop. Ask yourself whether it is necessary, and what is lost if you leave it out. 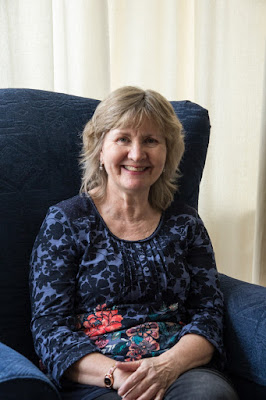 When a song by the mad composer, Carlo Gesualdo, is discovered in Exeter Museum, trouble descends on the group asked to sing it. Lisa is full of enthusiasm at first, but she soon becomes convinced the song is cursed. Can Lisa find out what mystery lies behind the discordant harmonies? Will she solve the song’s secret before her relationship with Jon breaks for good and harm befalls them all?

In Renaissance Naples, young Silvia Albana is seamstress and close confidant of Don Gesualdo’s wife. When Donna Maria begins an affair, Silvia knows that death is the only outcome. But who exactly will die?

And where is Silvia’s own lover? Why is he not there to help her?
As a big fan of the work of Barbara Erskine, I was delighted to discover a new Time-slip author whose first novel is a delight. I’m sure Cathie Hartigan has a great future.
Margaret James - Writing Magazine

Email ThisBlogThis!Share to TwitterShare to FacebookShare to Pinterest
Labels: cathie hartigan, exeter writers, guest bloggers, guest posts, how to research your novel, how to write a novel, top tips